What Software Does Glowforge Use?

When I first started researching the Glowforge 3D Laser, my first question was, what software does the Glowforge use? After plenty of online reading, I've concluded that "it depends."

The reason is that there is an app provided by Glowforge, which controls the 3D printer itself. This app imports a drawing file generated by design software, different than what Glowforge uses directly.

What Kind of Software and Hardware do I Need to Use Glowforge?

"You can use your Glowforge from your Mac, PC, tablet, and more, using our simple, powerful, and free web interface. You'll need an up-to-date version of Google Chrome, Firefox, Apple Safari, or Microsoft Edge."

"You can design with any software that saves a PDF, including dozens of choices like Adobe Illustrator, Inkscape, CorelDraw, Adobe Photoshop, GIMP, Autodesk 360, and Sketchup. Glowforge can print JPG, PNG, SVG, PDF, and other file formats. To print a file, drag-and-drop it directly on our app, and then adjust the preview to your liking."

The laser cutter software itself is needed to control the operation of the Glowforge. The company provides it, and you have free access to it once you've purchased a unit.

Please note that while the essential software is free, Glowforge is currently adding additional functionality available only to premium members, i.e., a monthly subscription.

It is web-based but interacts with your Glowforge laser wirelessly. When you initially set up your new unit, you must connect it to your local Wi-Fi network. Your Max, PC, or tablet then communicates with it vis your local network.

Suppose your primary purpose for buying a Glowforge is to create things and not to design them. Then there are plenty of websites from which you can purchase designs or drawing files. It's not a requirement for you to know design software to use the printer. You could skip the design process altogether.

Glowforge has an online catalog full of designs you can easily print. They introduced a new monthly "freebie" design with their current premium subscription offering. What I've seen so far, the products are impressive.

Many laser files purchased online come with a commercial license, allowing you to create products to sell. 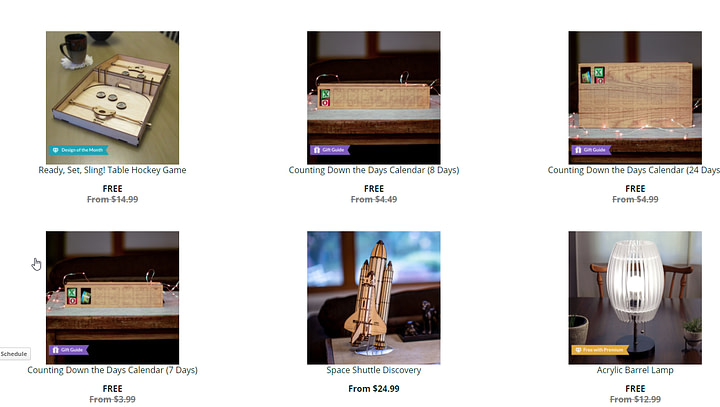 The company does not provide your design software with your purchase. Over time, they have added some features to their printer software, which would allow you to create simple text and shapes. They also have an online vector library to include images in your laser product. However, this will not replace the need for some good design software.

If your goal is to design and create products, you'll want to learn one or more of the different design software applications. Some of these are free, and some are not.

Adobe describes it quite well on their website, with some example images to illustrate the difference:

Looking at the list of software applications listed above, Adobe Photoshop and GIMP would be good examples of raster editing software.

Adobe Illustrator and Inkscape would be good examples of vector editing software.

The Glowforge printer software works primarily with vector images. Based on stroke colors, you can control the laser's cutting, scoring, and engraving operations.

Raster images, such as the PNG format, can be imported directly into the printer app. However, raster images are always engraved. If you want to cut-out the engraving from whatever material you are using, you would need to draw a line around it, e.g., square, circle, etc.

You can embed raster images in vector images. These kinds of options lead to imagining all sorts of different combinations you can design and create. The flexibility is the reason many Glowforge owners learn a design software application. The "sky is the limit" with what you can make on your laser.

The Interaction Between the Glowforge Printer App and the Design Software

It took me a while to understand the interaction between these two processes, but it's not that difficult. It involves "color-coding" the lines in your drawing.

The image below is the vector (SVG) drawing of a Christmas ornament I bought from a shop on Etsy. The names were missing in the middle. I added them as an example.

The thing to notice is that the lines in the drawing are four different colors. The green in the middle is a slightly darker shade than what is the bottom and top objects. This is looking at the design using Adobe Illustrator. 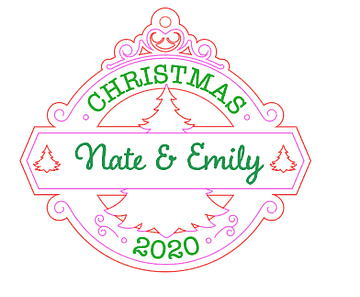 When I import that vector (SVG) design into the Glowforge printer app, you can see the ornament. The colors are not as clear as they were in Adobe Illustrator (I drew the green square on the image captured).

The first two steps are engraving, which represents the two different shades of green.

The score represents magenta. Finally, the red represents the cutting.

The laser will follow the order of these steps. The top and bottom objects are engraved first. Scoring of the magenta lines are next, and finally, the cutting on the red lines completes the ornament. The final operation frees the decoration.

Quite often, you want your primary cut step to be last. If not, you risk it slightly moving when freed from the rest of the material.

Below is a second example of a Christmas ornament vector (SVG) drawing.

This example has multiple pieces. I've only included two of them.

The first piece with the lamp post would result in two different steps in the laser app.

The magenta here is a fill color instead of a stroke (line). The Glowforge would interpret this as an engrave step. There is no line (stroke) around the "R" character, so this would remain untouched by the laser. It would finish as a raised letter.

Since there are two circles, the inside of the ornament would be cut free. The result would be a ring with a lamp post.

Cutting the second "ring" in the image would leave Christmas trees in the middle. Since it's a different color, it would be a separate step in the Glowforge app.

The below image is what it looks like cut out 1/8-inch acrylic:

Clicking each step in the left-side panel opens up an option to Engrave, Cut, Score, or even Ignore that particular step.

Clicking on the right arrow gives you full control over the laser process. This particular step is from engraving. All of these settings vary depending on which material you are using in the laser.

A second example shows the settings for cutting. The speed is slower, and the power is more significant, allowing the laster to cut entirely through the material.

Glowforge sells what they call "Proof-grade" material. They give you a supply with the delivery of your new laser. It's premium quality material, and it also has a 2D barcode on the front. The camera on the Glowforge laser scans this barcode to determine what material it is and what settings each of the different steps required.

Using proof-grade materials takes all the guess-work out of using the laser.

Picture of the proof-grade draft board in the laser bed:

Picture of the proof-grade draft board in the Glowforge app:

The Many Items Made with Glowforge

The best way to see what owners are making with their Glowforge Laser is to browse through the Made on a Glowforge category of the community forum.

You can spend days doing this.

Learning their app is easy. It's a little intimidating at first, this cutting machine in your home. However, they supply you with materials to get started, and there are free designs available online. Your most significant task might be setting up a venting solution.

I chose to learn Adobe Illustrator. I'm a software developer proficient in a few different development languages. Even with that experience, Illustrator design software was still a bit intimidating to me. It has so many functions it can do.

I took an overview course of it on Pluralsight, who I already had a subscription. It was ok, but it was several years old. Much of the functionality was still the same.

The problem with it was where to start. There is only one way you have to eat it like an elephant – one bite at a time.

Adobe Illustrator For The Glowforge Videos

Glowforge has some tutorials for mainly Inkscape and Illustrator in the community section of their website. Some of these were helpful, and they have them well documented in their startup instructions.

Stumbling around, however, I landed on a website named DANIELLE WETHINGTON. She has a page on her site explaining the use of Illustrator specifically for the Glowforge. She has some videos which focus only on a few required functions you need to know in Illustrator to succeed on the Glowforge laser.

Narrowing the focus down helped me tremendously.

How to Work with Stock Are for the Glowforge

Big Blue Laser Designs is another excellent web site with tips and tutorials on using Adobe Illustrator with Glowforge.

Connecting Test to A Shape in Adobe Illustrator Video

A Quick Look at Kerf

Glowforge Tutorial: Cutting a Design with Multiple Layer in one File Video

How to Make Your Own Laser Cut Bible Verses Video

How to Make Money with Your Glowforge Video?

Adobe has some great and simple tutorials on the basics of creating and editing different shapes. Including how to draw, combine, and trace shapes.