My daughter recently asked me to create a dog picture engraving for a friend. She thought it would make a great gift for a fellow pet owner. Family pets are important to many people.

This request was ironic as I recently completed a dog memorial gift engraving for her, as I wrote about in a separate Glowforge project tutorial article.

What she asked for was a bit different, however, and worth writing another article. She had been researching projects in various Facebook groups and came across engraving on dry erase board. Along with that, she was purchasing Photoshop Actions to prepare the image for engraving.

Preparing the Dog Image for Picture Engraving on the Laser

As I wrote about in the above article reference, I included manual steps on preparing a photo for laser engraving.

The steps were manual, but using either Adobe Photoshop or Gimp is easy to do. I used Photoshop and didn't have any problems.

However, when my daughter told me that the Photoshop action script would do this automatically, I was interested. Moreso when she offered to buy it, even though it was only $15.

The script is written and sold by JB Manning. He is a photographer and founder of the puzzle site wimberleypuzzlecompany.com. He travels the country taking pictures of real places that people know. With a particular printer and a Glowforge Laser, he transforms these beautiful images into puzzles.

The main requirement is that this works with Photoshop only. If you are using the free Gimp application, then this is not an option for you.

The included instructions are easy to follow, and the script is easy to install in Photoshop. It's merely a matter of double-clicking one of the included ATN files.

Crop the Image in Photoshop

My daughter sent me a photo of the dog she had found on Facebook. It was not any unique image quality. The resolution was only 72 pixels/inch. 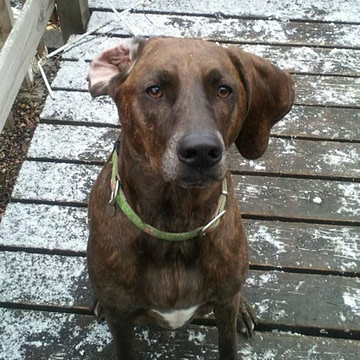 The original image was about 5.7-inches squared. However, the finished engraved pet photo required a 5-inch by 7-inch size, so I set the cropping tool in Photoshop to that ratio and cropped it. Using the crop tool, you determine the final aspect ratio before running the actions script. 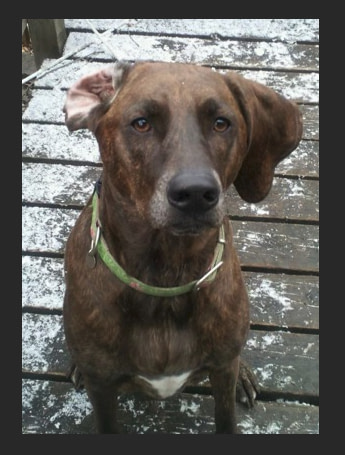 Once this is complete, you open the actions palette in Photoshop.

The list of actions is a little bit intimidating after opening the first time. After reading the instructions, they indicated that option 1 was the standard action. It treated reds and yellows darker during the conversion.

I was good with the default choice, so number one is what I selected.

The first dialog popup asked me to confirm the color levels. This step was not in the instructions but seemed pretty obvious, so I clicked the Ok button for the default values.

The next prompt tells me that the automatic edits have been completed. I can see from the image that it is now black and white. Greyscale is a requirement for engraving on the Glowforge Laser.

At this point, I can either stop the action script and make my custom edits. Or I can continue saving the new image for the Glowforge. I choose to continue.

Moving along, the next screen in Photoshop prompts me to enter the new image's size and resolution values.

However, the instructions show a different screen prompt, which I did not see before this. This screen explained the relationship between the image resolution and the Glowforge lines per inch values.

As we'll see later, one of the settings in the Glowforge for engraving is the LPI, or lines per inch. I'd read somewhere that 270 was the ideal value for this setting.

I planned on using the Glowforge Draft settings for the engraving. I tried the HD option once before, and it nearly tripled the amount of time required to engrave. It was not the right time for that, so I never let it finish to see if it was worth the wait.

However, I still entered 270 for the resolution value.

I clicked the Ok button in the image resizing dialog, and Photoshop prompted me to save the new PDF file. The dog image was ready for engraving.

The final step was to send the image to the Glowforge for laser engraving.

First, however, I needed a rectangle drawn around the image. The Glowforge application requires this so that it knows to cut the finished engraving out of the material. I described this in a little more detail in my article on creating a dog memorial gift.

Rather than mixing raster and vector image types, I used Adobe Illustrator to create the rectangle. Illustrator was quickly able to save this in a separate SVG file. I would use the Glowforge app to combine the two artworks. Everything was ready for the first test.

I was using a dry erase board for this engraving. My daughter had read that the white background produced a nice effect in the final engraving.

Our local Lowe's had a dry erase board in stock, in the 2-foot by 4-foot size. I had the employee cut this into quarterly lengths so that the end cost was very inexpensive. My engraving would only be 5-inches by 7-inches.

I had also researched some custom settings to use in the Glowforge with this kind of material. The Glowforge laser began engraving, and I watched as it completed.

I noticed as the laser worked that the dog's chest looks blotchy. It looked to me like the power level of the laser was too high. By default, the settings I used had the power set at 100-percent.

As typically happens to me when reaching this stage of a project, I became side-tracked. The actual time to engrave on the laser was nearly an hour and a half. Rather than waiting that amount of time again, I looked for the answer in the community forum.

I did find another owner who suggested I set the power to 80-percent. But many other forum threads suggested doing your test, as every material engraves differently.

So I found the following "wheel" test to use. It allowed me to change certain settings to see what effect they had on the engraving quality.

I kept the line-per-inch constant at 270 and the speed constant at 1000. Configuring the Glowforge laser settings, I then varied the power on each of the different wheels. I started with the power level at full, which I had already used. Then I reduced it by 20 for each of the remaining two wheels.

Once this test finished engraving, we confirmed that using the power setting at 80 would be best.

One more laser engraving later, and the finished product looked good. You can see how nice the white color of the dry-erase board looked in the background.

I did not use masking tape with this board. It's nearly impossible to remove all of it when doing an engraving. However, the top edge had some burn marks from the cutting process. My daughter likes how that looked, so all is good!

I finished the process with some Minwax Polycrylic protective finish to give it that finished and protected look. All it needed now was a 5-inch by 7-inch frame.