Our daughter's beloved pet Sheltie passed away this year, and my son-in-law asked if I could use my new Glowforge laser cutter to create a dog memorial gift for her. The loss of a pet is hard for a pet owner, and he wanted a picture of Maverick as a puppy engraved on a thick, square piece of acrylic.

I told him that my Glowforge Plus was up for the task.

I started the process with an old memory keepsake photo of Maverick as a puppy. Someone would have taken it nine or ten years ago. 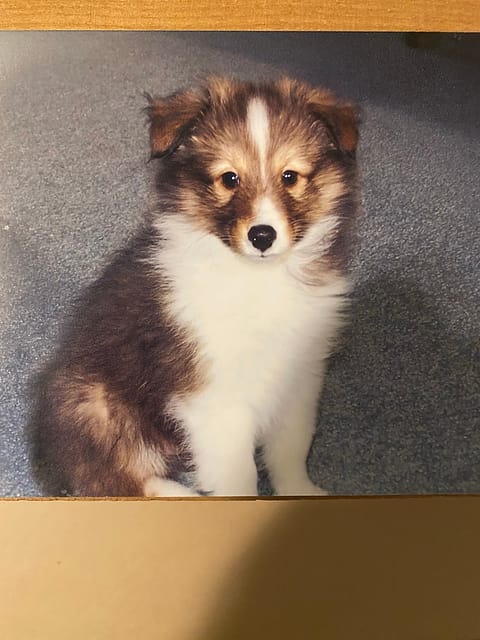 The first step required getting the photo into digital form. I did this using my HP Envy 7640 All-in-One Photo Copier, Scanner. I used the higher resolution scan option of 600 DPI. As I found out later, only 300 DPI is needed to get a suitable laser 3D engraving. 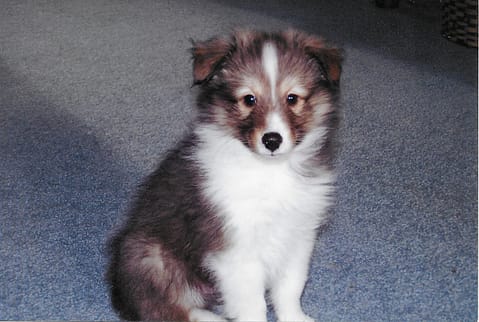 Since the dog memorial gift's end goal was to be square, I used Photoshop to crop the image.

The next step was to prepare the photo for 3D laser engraving. Glowforge defines 3D Engrave is a process requiring a grayscale picture:

One of the amazing things you can do with your Glowforge is engraving shapes with real depth and detail. You can't use a regular image for this - you must use an image that's been specially created for 3D engraving called a Heightmap. A Heightmap is like a grayscale picture, except that the darker a spot on the picture is, the deeper it will engrave.

How to Prep a Photo for Laser Engraving

I explain the difference between these two types of images: What Software Does the Glowforge Use?

Glowforge does an excellent job supporting both the leading commercial design software products and the top open-source, free products.

The articles go through the steps required very well. There is certainly no need to repeat the details here, but I'll include the steps in the unlikely event the articles are no longer available.

You'll find that all these steps are subjective. It depends on the photo image you're working with and what you feel looks best.

As I went through the steps, I stayed close to the recommended settings. But you can play with them a bit to see the effect that they have. As you do this, though, I'd suggest writing down the original setting value or keeping a copy of the original image if you want to go back.

I ended up with the following black and white dog memorial gift image.

The background of our photo was a carpet. I did not want that engraved into the acrylic, so I needed to make it transparent.

I knew Photoshop could do this, but I did not want to take the time to learn it. I'm focusing all of my energy on learning Adobe Illustrator right now. So, I cheated.

Adobe has an online Photoshop Express application with a background remover tool. You do need to have a free online account with them to be able to download the result. So I guess the price you pay is ending up getting their emails.

I already had an Adobe account, so it was a no-brainer solution for me. The result looked quite good.

Importing the Image into Adobe Illustrator for a Test Engrave

However, my image is about 3-inches square. I will be cutting it out of a larger piece of acrylic. Since the photo would be a raster type, the Glowforge would only engrave it. However, it would not be able to cut the finished image out of the material itself.

If you have Glowforge premium, you can do this within the Glowforge app by drawing a square vector shape around the image. However, doing this requires a Glowforge Premium membership. I describe this in detail in my article What Software Does the Glowforge Use?

I have a premium membership, but the functionality of the tools is quite limited compared with Illustrator.

With Illustrator, this task is easy. I drew a square 2.95-inches by 2.95 inches. I then embedded the puppy image into the new shape, using the alignment tools to center it.

The only trick to making this work is that the Glowforge app requires that raster images be "embedded" inside vector images. You can mix the two types if you meet this requirement.

I had the image embedded in the square shape. I didn't realize, immediately, that there is another option you must set for this to work.

When you save the vector as an SVG type, an options screen pops up. Right in the middle of this screen is an option for the image location. You must set this option to embed also.

Once you set this option, the Glowforge software opens the SVG file with the embedded raster image.

Once imported into the Glowforge app, I had two processing steps. I set the first one to Engrave. Precisely, 3D engrave and the second one to Cut.

My son-in-law had already purchased some 1-inch thick squares for me to engrave the puppy image. However, I should have paid more attention to the product he was buying. It was an Amlong Crystal Square Crystal Paperweight for Engraving with Gift Box.

I assumed he had purchased acrylic, but it had almost no depth to the engrave when I tried the final engraving. It acted like the material was glass. I tried some other settings, but the result was no different.

This acrylic did engrave very quickly and looked very nice. We could optionally fill in the engraving with some colored resin for a smooth, finished look. It will make a lovely dog memorial gift.

After completing this pet remembrance gift, I did another pet engraving for a friend of my daughter. I wrote about this in a separate dog picture engraving article. Gifts for pets was a popular Glowforge laser activity this year.

However, for this pet lover's gift, I used a different approach in preparing the digital photo for engraving. As the article explains, I had Photoshop actions that automated the process.

I was eager to try that out on another project, so I re-visited this one.

It did not take much effort to start over with the original digital image in Photoshop. Instead of cropping it as a square shape, I trimmed it for the 5-inch by 7-inch ratio.

I then put the new image through our new Photoshop actions script.

After the actions finished, I used Photoshop Express again to remove the background. The background removal did not work as expected, as it removed part of the dog also.

So instead, I tried removing the background before preparing the engraving image. I thought that maybe with the image still colored, Photoshop Express would separate the background color. It worked!

After removing the background, I then re-executed Photoshop actions. The result was perfect!