After installing the Caseta ceiling fan switch in our master bedroom, my wife expressed interest in controlling it with her own iPhone. For those who are installing smart home technologies, getting spousal support can be significant. So it was time for me to figure out the best way of sharing the Lutron Caseta app with my wife.

During the initial process of installing the Caseta App on my smartphone, the app prompted me to create an online account with Lutron. Later, when it comes time to share your home system with someone else, you need to use the same residential Lutron account credentials.

However, in our case, my wife preferred using the iPhone Home app, which is part of Apple HomeKit. It offers seamless integration with the Lutron Caseta Smart Bridge and Smartphone App.

Getting our Caseta system on my wife's iPhone proved to be different from what I was expecting.  Having been through the complete process now, looking back, it's quite simple.

Installing the Caseta App on my wife's iPhone starts with the same steps as using the iPhone App Store.

Starting the app for the first time on my wife's iPhone worked much like my own. Two different options are displayed; Get Started or Sign In. In her app, I needed to click on the Sign In button. 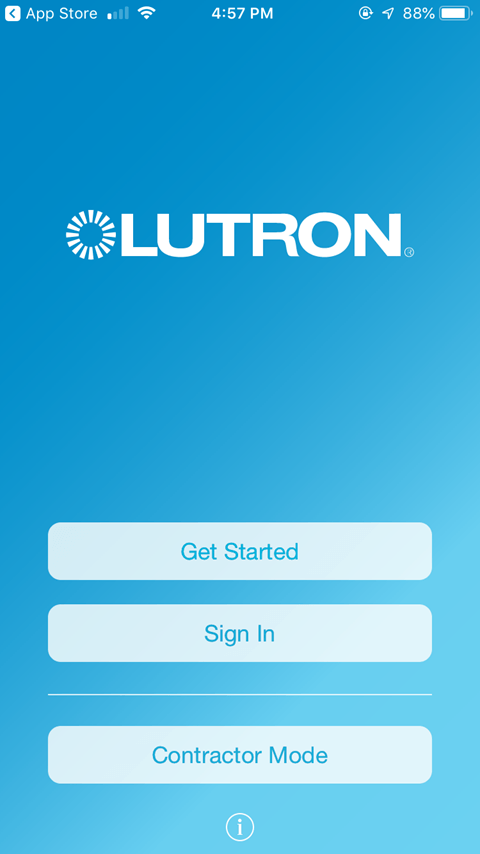 The app displays a screen prompting me for the Lutron Cloud account credentials I created when getting started for the first time on my own iPhone. Entering those credentials is done here. There is no functionality to create separate user accounts with the Lutron residential system. 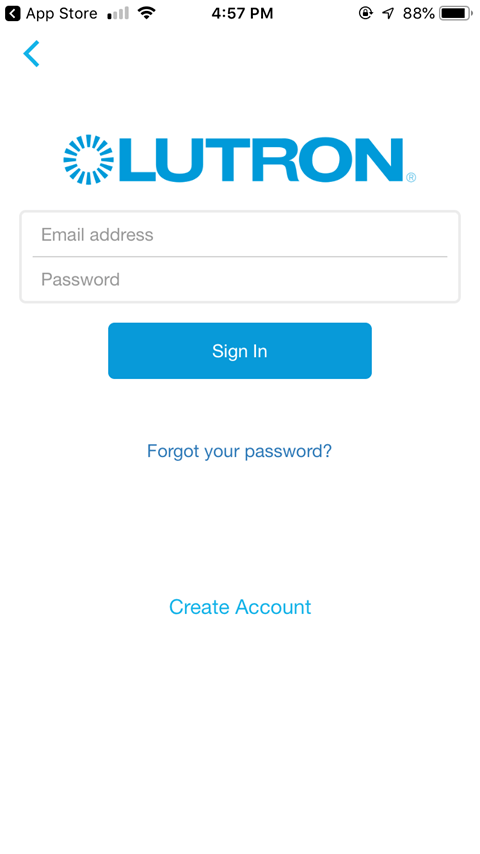 My wife's app screen then displayed a message connecting to our current home system, which I had already configured using my own iPhone.

Once the app connected and retrieved our home system data, it prompted permission to access and sync the local home data.

After accepting the permissions request prompt, our current Lutron Caseta home system displayed on her iPhone app. The same devices, along with the same functionality, were all available.

Earlier I mentioned that the end goal was for my wife to control our Lutron home system using the Apple Home app on her own iPhone. I naturally started this process by first installing and configuring the Lutron Caseta app, as outlined above.

The first step when getting started with the Home app is to install an accessory. Adding the Smart Bridge as an accessory is what I did with my own iPhone, so it made perfect sense.

Adding an accessory was simple for me. Once you add the smart bridge, all the rest of your home system devices are available to your Home app.

Only Two Steps are Required to Add an Apple Home Accessory

To add your Smart Bridge, you need the 8-digit Apple HomeKit setup code found on the device's bottom.

While the process of adding the Caseta Smart Bridge as an accessory on my own iPhone was straightforward, this was not the case on my wife's iPhone.

I could not get the second Home App to recognize the Smart Bridge as an accessory.

I tried several different things, then spent some time searching the Internet. I did find many different forum threads with a similar issue.

These forums threads offered a few other options to try. Most of them involved restarting the Smart Bridge.

I did power it down a few times and restarted it. But none of these efforts solved the problem.

Other forum threads suggested resetting the Smart Bridge device, but I was not ready to do that. I did not want to risk losing all of our home system devices already configured. I would then have to re-add all of them, even though I had only a few so far.

Long story short, the solution to this problem ended up being incredibly simple. I stumbled on to it while reading the HomeKit Troubleshooting Guide for Caseta Wireless on the Caseta Wireless website.

The section in the guide on how to invite a second Apple ID was the solution. While the manual steps were not a one hundred percent match to the Home app, it gave me enough information to figure it out.

The process starts with the Home app on my own iPhone. The very first screen has a small home icon on the top left of the screen. It was so little I didn't think much of it.

Usually, a gear icon leads to settings options. The home icon didn't look anything like that.

Regardless, this home icon is the icon you want to click.

The next screen has a few setting options to control your HomeKit home. The one you need here is under PEOPLE.

The only person under here at this point should be yourself. The small link underneath that named Invite is what you want to click next.

The next prompts you for an Apple ID of the person you want to invite. For my wife, it was her email address. I found this and added it, then clicked the Send Invite button.

After I clicked the Send Invite button, the app returned to the Home Setup screen. The screen had changed to displayed my wife's Apple ID name next to mine. Underneath her name was a small caption indicating that her Invitation was pending.

Back on my wife's phone, the Home App icon had a small number in the app icon's top right.

If you're watching when you send the Invite, you will see a message display on the other phone. However, it's not a normal iMessage but rather an app message which you can only see by opening the app.

After opening my wife's home app, the Invitation was the first screen displayed. You can Accept it, Decline it, or Decide Later.

After clicking the Accept button, the next screen immediately displayed our complete Caseta wireless system, configured using my iPhone with the Caseta app.

Back on my iPhone, I returned to the Home Setup screen. My wife's Apple ID was still displayed next to mine, but without the Invitation Pending message. The share was complete.

While sharing the Lutron home system using the Apple Home app was more comfortable than expected, it also had an additional feature I was not expecting.

The automation or schedules I create on the Lutron app are not visible in the Apple Home app. You can control all of the devices, but there is no way to change the schedules.

This absence, in itself, provides you a level of security. It's not that I don't trust my wife with the schedule information, but instead, she might not understand or most likely not even care about it. I'd be more concerned about the grandkids getting into it.

If you share the actual Lutron Caseta app itself, then full functionality with schedule editing, etc., goes along with the share.

After adding a couple of more Lutron smart switches to our home, they automatically showed on my wife's Apple Home app. Our smart lighting could be controlled from home or from anywhere!