This Glowforge project is about creating a DIY Tic Tac Toe Board. I'm still learning about the workflows when using the Glowforge Laser. As a result, I purchased downloadable files from an Etsy store shop to keep things more straightforward.

The name of this shop is GoodsLaserCut. The site is another store where Buyers are raving! This shop got multiple 5-star reviews in the past seven days.

As their name implies, they focus only on digital download files for laser cutting machines. They've only been online for a couple of years but already have a large number of products. There is also a wide variety in the kinds of products offered.

The Tic Tac Toe Board Files

The files delivered were pretty standard and included CDR, PDF, SVG, and DXF file types. With Glowforge, I could use either the PDF or SVG file types. 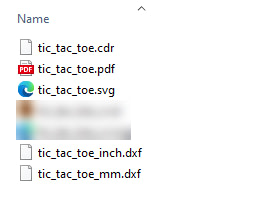 I planned on working with the SVG file in Illustrator. Technically, there was not anything I needed to do with the drawing file. And it could have been imported directly into the Glowforge app and printed.

You can see a partial image of the drawing below. I also distorted out a portion of it so that somebody could not copy it. It's not that complicated, two pieces slightly under 5-inches squared. One of them had the cutouts of the "X" 's and "O" 's.

The square cutout remaining is then glued to the solid square piece for the finished game board. 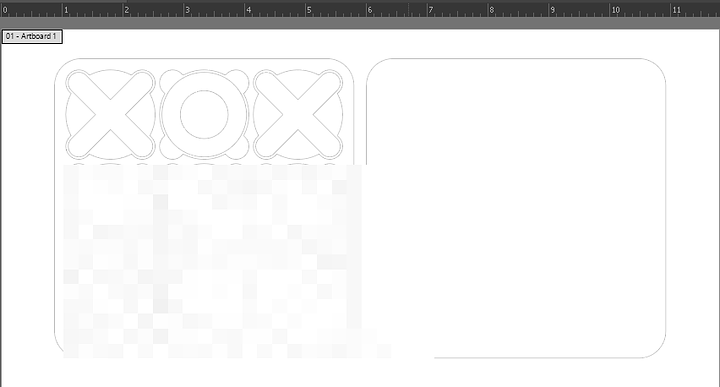 The only part of the drawing I wanted to change was the line colors. By default, all of them were black. I desired to fine-tune the ability to control the order of cuts in the Glowforge software app.

I wrote in a separate article about the interaction between the Glowforge printer application and the design software. In summary, you can control the cutting steps and actions of the Glowforge laser. However, you can do this only for those parts of the design, which are colored differently.

The Glowforge app allows you to import a drawing file with the lines or strokes all one color. However, then you would have less control over the cutting actions.

As a result, the Glowforge application determines which order the cuts happen. Generally speaking, you want the cuts to occur from the inside out.

If you instead cut from the outside in, then there is a risk. The piece could move only a little when it disconnects from the rest of the material. In which case, additional inner cuts would not be accurate.

After more research, I learned that there is a specific ordering of the Glowforge processing steps based on certain colors.

Only using different colors in the design would allow manually re-ordering with the Glowforge. However, the ideal scenario would be for this order to be correct when imported into the Glowforge.

I spent time reading through a forum thread in the Glowforge community. Owners discussed in detail how the order is colored control from different vector design software applications.

This forum thread included custom color palettes, which to use in ordering operations in Glowforge app UI. You could download palettes compatible with Inkscape, Illustrator, CorelDraw, or Affinity Designer.

The previous link is to a custom Adobe Illustrator custom pallet. The image below shows 22 different colors and the order they appear in the Glowforge app.

While at first look, this may appear to be random, it is not. If you look at the "hex value" of these colors in the image below, the logic becomes obvious. The Glowforge software sorts based on color using the "hex value."

One of the owners used this insight to create the list. He chose the colors from the list of twenty simple, distinct colors by Sasha Trubetskoy.

To test this new finding, I used a test design and applied all twenty-two colors to each of the numbers.

Once I correctly colored each test number, the import process had the correct sequence in the Glowforge app.

Using what I just learned, I proceeded to change the coloring of the tic tac toe board's SVG drawing.

For the inner circle of the "O" 's, I left the color black. Black is first in the ordering of the Glowforge actions. The "X" 's were also an inner shape, so I kept those black as well.

The next outer circle of the "O" character I changed to the navy color. It would then be the second cutting action.

The board cutout shape containing both the "X" 's and "O" 's I changed to Teal. It would be the third cutting action.

The final cutting action would be the board squares, and I changed both of these to blue. They would be the last action of the Glowforge laser.

I imported the modified version of the SVG file into the Glowforge application. Sure enough, the order was as I expected. I only needed to change the speed settings for each of the actions.

The second cutting action was the outer circle of the "O" characters.

The laser cut the shapes containing both the "X" and "O" characters for the third laser cutting action.

The final laser cut would be the outer edges of both squares.

Finishing the Tic Tac Toe Board

The Glowforge laser had cut out all of the DIY tic-tac-toe board pieces. I still needed to remove the masking tape from the different parts.

There also remained a pile of scrap pieces.

The first task was to "weed" or remove the masking tape from each of the pieces. Once finished, I then glued the two squares together.

I have a wood-working friend who keeps telling me you can never have too many clamps. I believe he is correct.

The glue I used was the Loctite GO2 Glue All Purpose Adhesive, 1.75-Fluid Ounces from Amazon. The clamps I purchased from our local Harbor Freight store.

The "tic tac toe board" was made out of real cherry hardwood. As a result, I didn't see a reason to do any more finishing to it. I could probably apply some Minwax Polycrylic protective finish to it to give it that finished look.

This tic tac toe game has been an excellent DIY project for our grandkids. They love playing with the game pieces. It would also make a wonderful handmade gift for relatives.