We recently built a new custom home. However, what it did not come with is a bathroom fan timer switch. I worked as an electrician earlier in my career, so I was very comfortable doing this task myself after moving in.

There is a wide variety of countdown timers for bathroom fan switches to select. You don't need to spend a lot to get a decent one for better air quality. I knew for sure that I wanted a digital, rather than a mechanical or spring-loaded one.

I also have a larger project in progress, replacing switches in the rest of our home using the Lutron Caseta wireless dimmers. While I didn't see it necessary to automate the "toilet room controls," I did choose to stay with the Lutron brand.

I selected the Lutron, part number MA-T51MN-WH, switch for this project. Lutron also makes a less expensive version of this switch that does not require a neutral wire (MA-T51-WH).

I opted for the more expensive one, as I knew that having a neutral wire would not be a problem for me. We recently built our new home, using current electrical code standards.

From what I read about the lesser expensive version of the countdown timer switch, it had a minimum requirement for the fan load to be 0.3 Amps or 40 Watts. Since we have a newer home with energy efficiency built-in, I didn't want to risk this being a problem.

The switch itself is easy to use. You tap the switch to turn it on or turn it off. You can set the timer from 5 to 60 minutes.

Neither of these switches is compatible with the Lutron Caseta Smart Home System. I didn't think that functionality was needed in a toilet room. 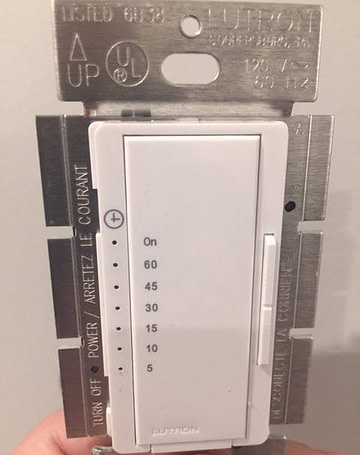 This particular bathroom fan timer switch was inside a toilet "closet." It's a tiny room with a door, inside of our larger master bathroom.

As a result, the fan also had a built-in LED light for the room itself. The bulb was controlled separately from the fan, so I had to decide whether to replace both switches or find a new combo plate. I chose to replace the light switch also. Of course, it had to be a digital switch from Lutron, as well.

Lutron has different styles of switches and plates. It can be somewhat confusing to understand all of their different naming conventions. The countdown timer switch I selected was Maestro, so the matching light switch needed to be a Maestro style.

The switch I bought was the Lutron part number MA-S8AM-WH. The description on Amazon indicates that it is a dimmer switch. It's not; the switch only does on or off.

I read somewhere else than "dimmer" with Lutron indicates a style. If so, it isn't obvious, again.

The product details show, "Tap once to turn lights on/off." That's what it does, and ALL it does. It's also all that I needed. 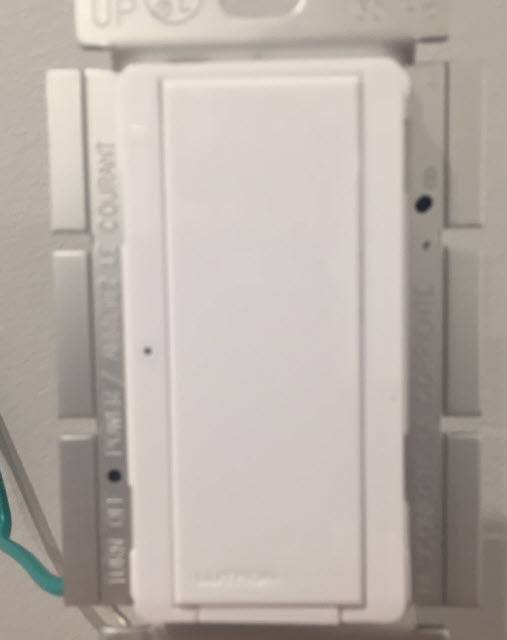 Lutron part numbers for both the countdown timer and switch. 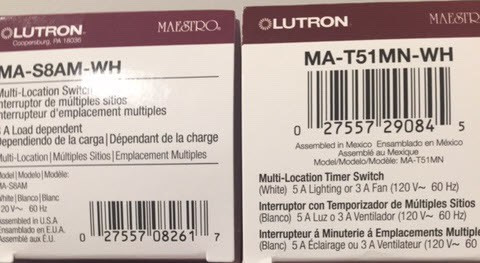 What's attractive about the Claro wall plates is that they are "screwless." Screwless, meaning that there are no visible screws. The lack of screws gives the switch a clean, sleek appearance.

The Lutron switches and wall plates come in a variety of different colors. All outlets and switches in our home are currently white, so I stayed with that color.

If you look at the wallplate from the side, you can see that there are two separate pieces: 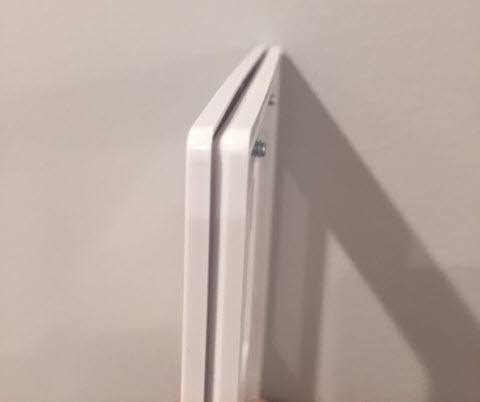 From the backside of the wallplate, you can see the six plastic clips which hold the two pieces together: 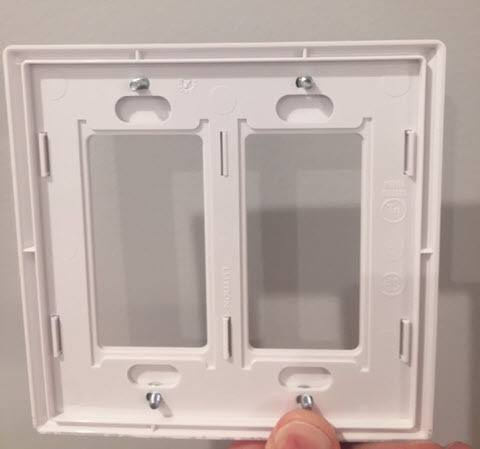 The result is a beautiful, modern, clean looking wall plate.

I aligned the new wallplate up against the existing one to confirm the size was about the same. Due to the style of the plate, it does appear slightly narrower. Since we have a new home build, this was not a problem. However, if you have repainted your wall, etc., you may need to touch-up the paint with this new wallplate. 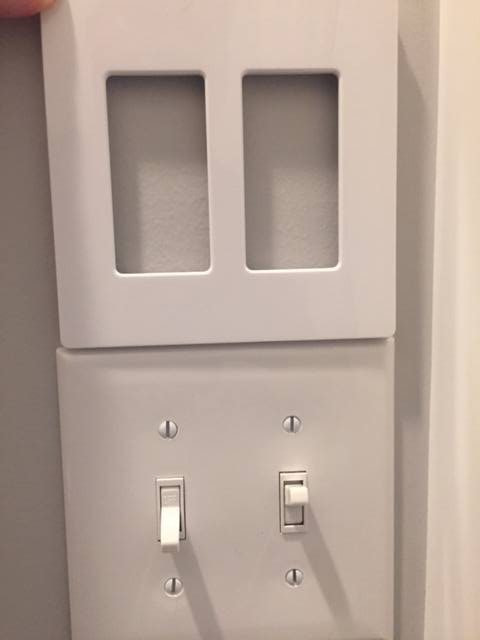 Removal of the Old Fan and Light Switches

The first step for installing the new bathroom fan timer switch is to remove the old ones. While it may appear messy with the old wallplate cover removed, this is a pretty clean electrical box (it better be in a new home!): 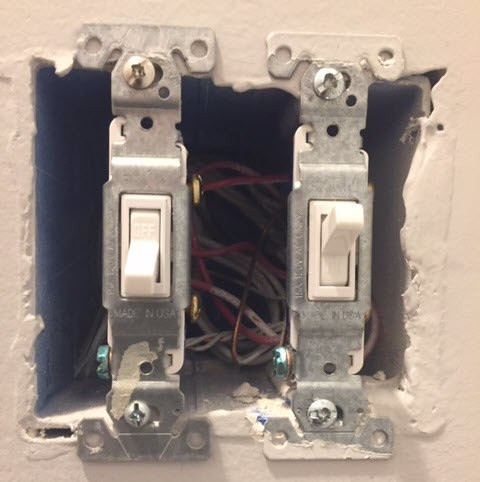 With the switches removed, you can start to see the wires involved with the installation.

Bathroom fan and light combo units are typically wire using 14-3 Romex. This Romex includes a copper ground wire, a white wire for the neutral, and two "hot" wires (switched) for the fan and light. One is black, and the other is red. It doesn't matter which one goes to the fan or the LED light.

You can see these wires in the image below. The white wires are all connected using a wire nut. I will need to add two more wires to this connection, one for each of the new Lutron switches.

You can see that the electrician crimped the copper ground wires together using a copper crimp. I'm not going to disassemble that. Instead, I'll use wire connectors to the existing copper wires coming off the old switches. 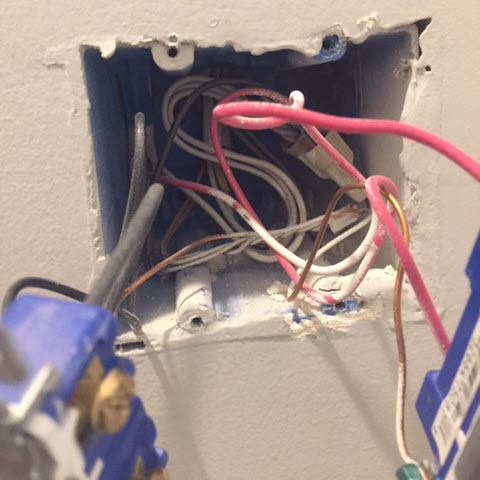 These days, many electricians connect the stripped wires to the back of the switch or outlet using the holes provided. Not many take the extra time to attach them using the screws on the side.

There is supposedly a way to "release" these wires from the switch. I find it easier to cut them using a wire cutter.

If you've not done so already, now would be the time to turn the power off to these switches. 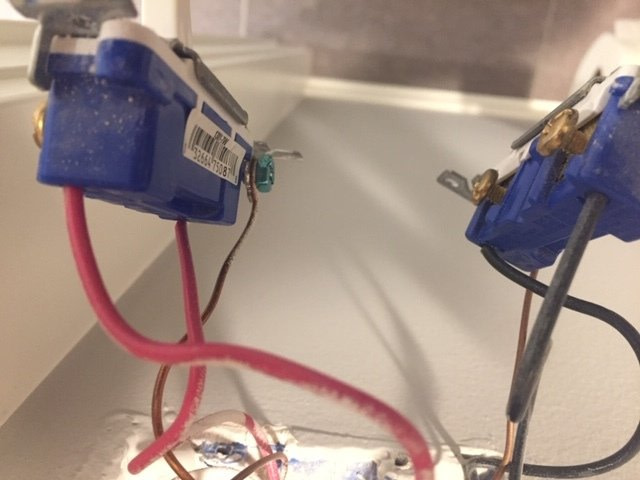 In the picture below, you can see that I'm ready to install the new switches. I've added two new neutral wires to the connection (went up a size with the red wire nut) and stripped all wires, ready to go. 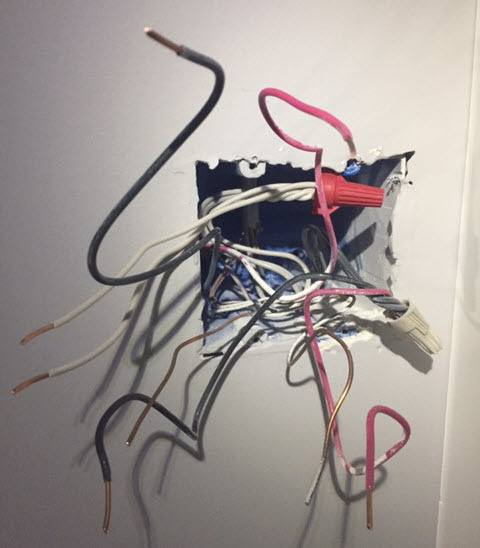 Should You Use the Blue Screw?

Typically when installing a single, three-way, or four-way switch, you buy different switches. Lutron provides its digital switches with the functionality to do all of these switching configurations.

When you first open your new Lutron switch, you'll see a blue wire. Not something you would expect.

The first image below shows both sides of one of these new switches. The bottom black screw on the left is where you connect your power line. While the middle silver screw will connect to your new neutral wire. 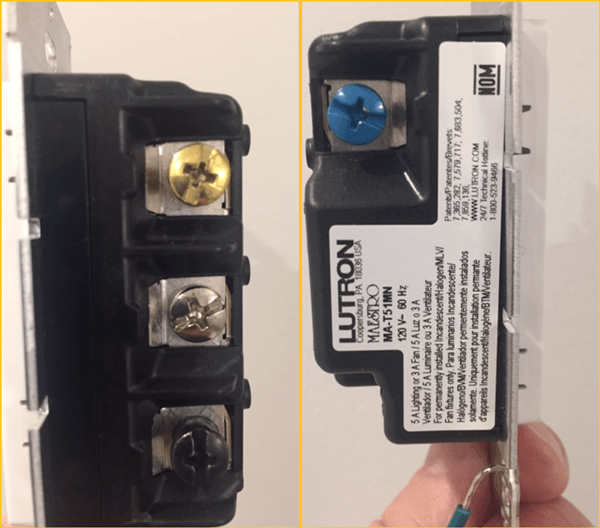 An additional view from the backside of the switch: 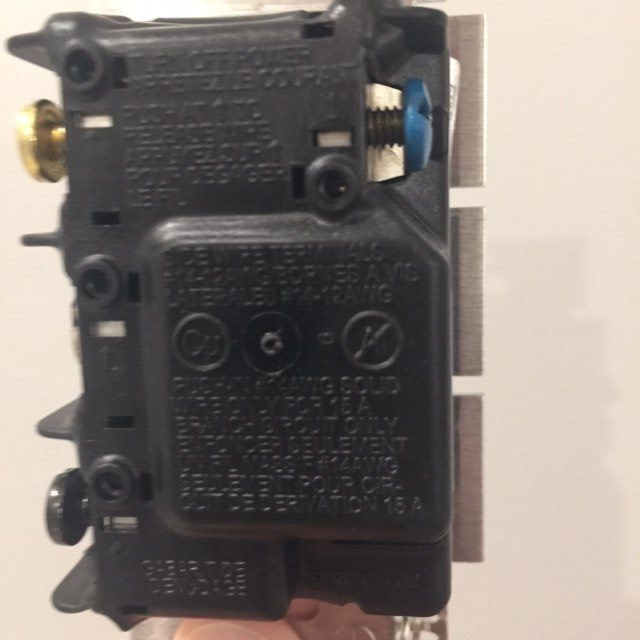 The included instructions also give you some useful diagrams to help you out. Both switches are single-location. They are not 3-way or multi-location controls. 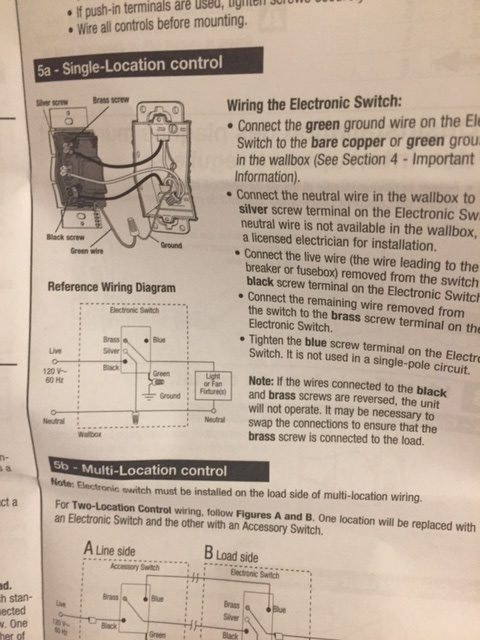 At this point, all the necessary connections are complete for the new Lutron digital switches. The next step is to get everything back into the electrical box. That seems impossible from the looks of this picture? 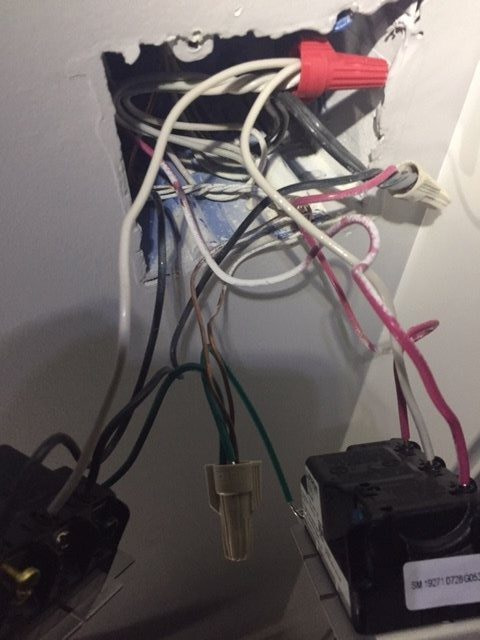 While the new switches are not that deep, you'll need every bit of horizontal and vertical space you can get.

In my case, there was some extra drywall mud on the inside of the box. The mud wasn't a big deal when the electrician installed a standard switch. For me, it needs to go.

I've always used an older straight-edged screwdriver, with a light hammer type tool (e.g., lineman pliers). Gently crack the dried mud alongside the edge of the box and remove it. 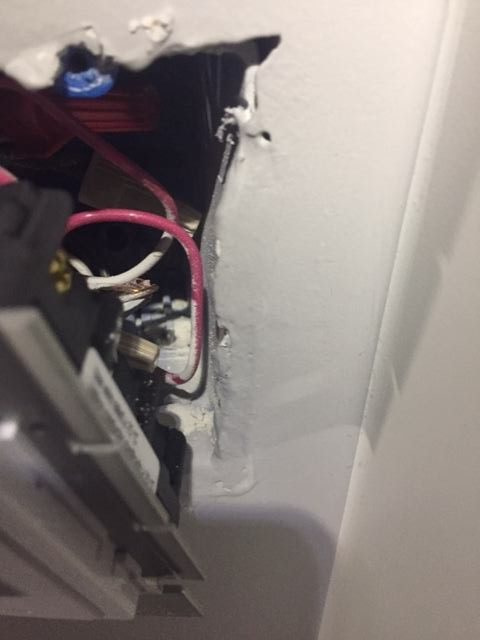 You will also need to break off the three metal tabs on the inside of both switches. Unless you do this, you will not be able to mount both switches side-by-side.

In the image below, I've broken off the top one on the left side switch only. I did break off the other five before mounting the switches. 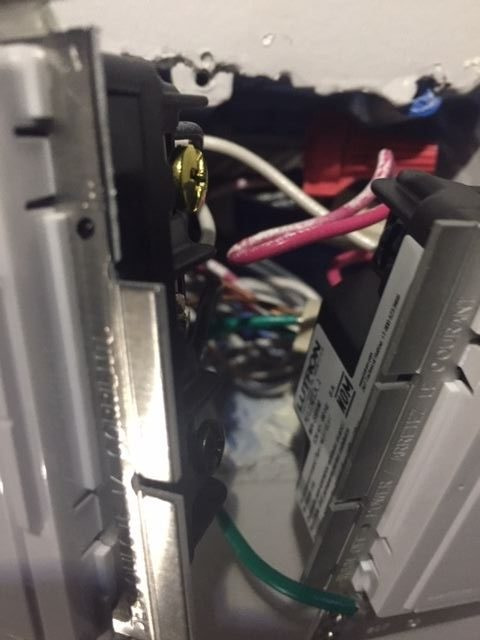 Installation of both the new switches is complete, and it's time to turn the power back on. 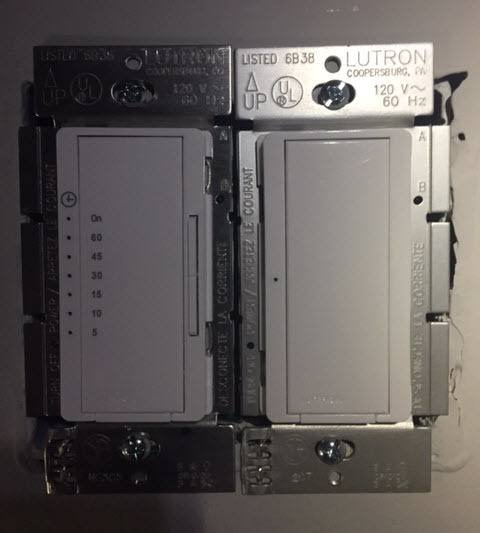 Circuit Breaker Turned Back On

Once the power was back on, the countdown timer was already on, set on the 15 minute time interval. The little LED lights to the left light on and off as the countdown progresses. 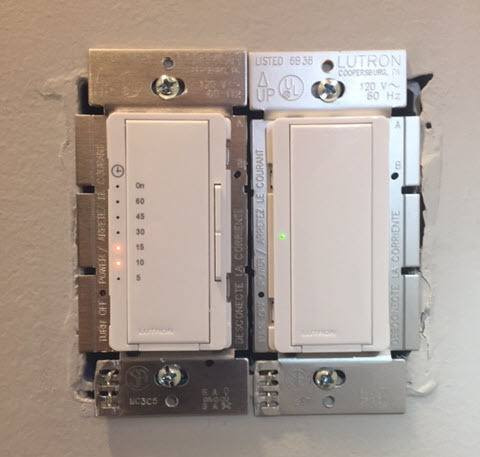 Installing the Lutron Claro wallplate is easy. You tighten the four screws provided.

The backplate has openings to the screws used for mounting the switches. These openings will come in handy if you need to tighten or loosen these. This way, you don't need first to remove the backplate. 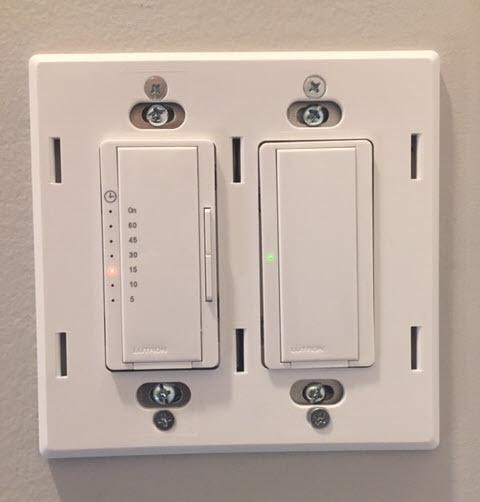 The last step is to snap on the front piece of the Claro wallplate. It was easy to install. 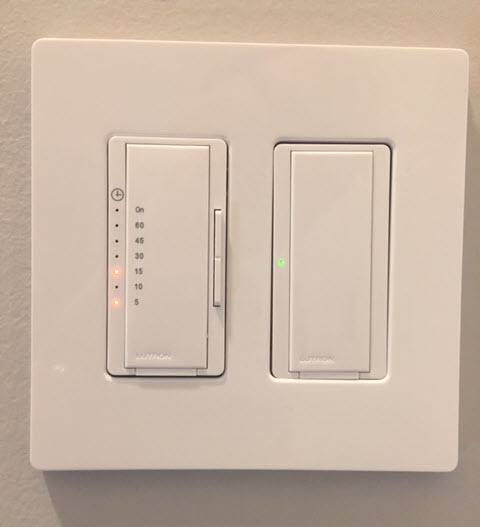 Products Used in this Installation