There are common file types used to store the vector file format when using a laser cutter. Perhaps you’re wondering what a vector art design is?

What is a Vector Image?

Two types of images that many graphic designers use are vector and raster images.

An array of bits within a rectangular grid of pixels or dots defines a raster image. You can have more dots-per-inch, making it a more detailed picture, which you could then enlarge.

Vector images different in that mathematical formulas define them. Because of this, they are easily scalable to different sizes. Increasing the size does not run out of pixels; it just changes the math calculations, and they remain high quality and any size.

I wrote more about this in my article What Software Does Glowforge Use?

Since mathematical formulas define vector images, they work well in CAD applications. They also work well in computer-aided machines such as the Glowforge Laser.

Computer processors can calculate the exact shape and position of objects and contours with ease.

Another benefit of vector file types is that frequently they’re stored in text format. You typically keep raster images as binary, although converting to a different, text-based storage format is straightforward.

Most people in this high-tech day and age know what a raster file is. While we might not realize it’s a graphic image per se, we know it by the file type. The two most common raster file types are PNG files and JPG.

Transfer the photos from your smart-phone camera, and you’ll see lots of these file types.

Vector graphics are not as well-known unless you are a CAD designer or buy laser cutting files from Etsy shops. On Etsy, you’ll see lots of these file types and wonder what they are?

The following list includes some of the more common vector file format types:

From this list, the Glowforge Laser will import either the SVG or PDF, i.e., portable document format, type of vector files.

The Glowforge will also import the raster graphic “.PNG” type. However, it will only allow for engraving actions based on the greyscale of the image. Any cutting or scoring operations will require vector paths.

It is possible to use both types with the Glowforge Laser at the same time. You can embed a raster image inside a vector graphic. The Glowforge file will read the two graphic types from one file. 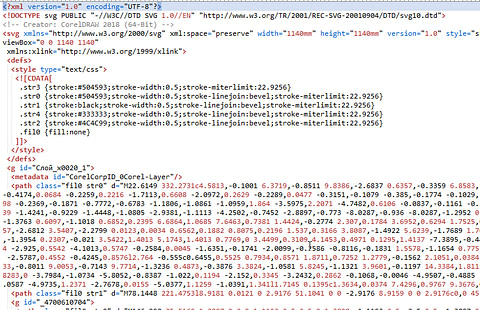 Creating vector files does require different design software. In terms of the Glowforge Laser, the two most common are Adobe Illustrator and Inkscape.

Inkscape is a popular free version of vector design software. Illustrator, on the other hand, is not. It requires a creative cloud subscription at a level that includes Illustrator.

Adobe Photoshop is an industry-standard for designing raster graphics. It also is part of the Adobe Creative Cloud subscription. Gimp is a famous free and open-source raster graphics designer.

One final point is the conversion between the two formats. You can quickly turn a vector design into a raster graphic. The reverse option is not so easy.

Converting a raster into a vector format requires a feature called tracing. The process is somewhat subjective and requires additional skills.