How to Make an Extra Income

This business success story is about Kirk, who has been with Wealthy Affiliate since 2016. Kirk has recently posted his success story on how to make an extra income.

Kirk actively promotes the Wealthy Affiliate affiliate program. In the seven months so far this he made 118 premium sales. This volume is about what he did in his whole prior year. Thus sales are increasing.

His conversion percentage has also increased to about 9 percent this year. The conversion happens when free signup at Wealthy Affiliate upgrades to a paying member. In his recent month, 25 sales came from 285 starter members.

Kirk has around 2,000 organic visits to his site per month. These visits are a result of the approximately 150 content posts on his website.

He also spends on PPC (pay-per-click advertising), which averages about $400 per month. His total income received this year is over $9,000.

Even with the PPC expense, he is still clearing a nice profit. Does Kirk think this extra income is worth the extra work? "Heck Yea".

Kirk is an over the road truck driver. He has been driving an 18 wheeler for the last 11 years. He has been all over the USA many times. 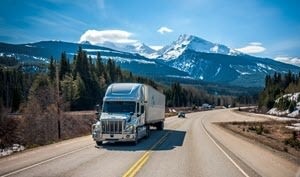 What initially attracted Kirk to truck driving is the same personality trait that attracted him to Wealthy Affiliate. He enjoys the freedom to be his boss.

With trucking, Kirk only needs to make his pickup and deliveries on time. Outside of those constraints, he is free to run on his schedule. He does not need to answer to anyone on an hourly or daily basis most of the time.

As a result, he can spend downtime on his laptop, learning how to earn some extra money online. This research is what brought him to Wealthy Affiliate.

Kirk is also home a couple of days of the week, where he has more time to spend on his new online business. He doesn't always use this time as well as he should, but he is working harder at that.

He showed his monthly income totals in this blog post at Wealthy Affiliate. They are considerably better than his income report a year or so earlier.

Kirk writes about his success so that other new members will be encouraged and not give up. Even though he nearly gave up himself on his journey.

You can read about Kirk's online business success at 25 Sales in June. My best month yet.

“You never fail until you stop trying..”