Escape From The Rat Race – The True Measure of Success!

This online business success story is about Steve, who joined Wealthy Affiliate back in 2009. While Steve has been to the Super Affiliate conference in Las Vegas at least four times, he is still writing blog posts in the Wealthy Affiliate community. For Steve, the escape from the rat race is the true measure of success!

Steve and his wife love to travel! For him, the most significant perk internet marketing has to offer is unlimited vacations.

Steve still works while they are traveling; it's just that his office looks like the following image during that time: 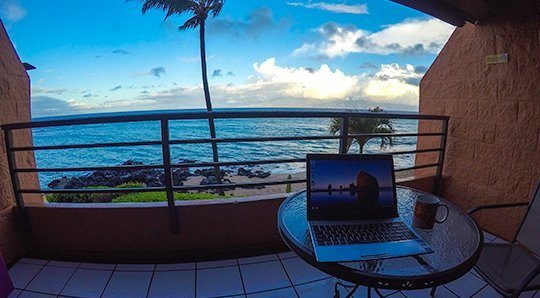 Second, to see the world, Steve's biggest hobby is photography. Many of his blog posts capture the scenic beauty of their recent travels.

Steve is asked quite frequently how much money he makes? While he hates these questions as it's relatively rude, he also knows that you can easily fake income claims.

Sharing photos from their trips around the world cannot be faked. They also prove that Steve's able to live his desired lifestyle.

Steve details a whole year of their travels. He considers it to be living the life he has always wanted. He is not stuck behind a desk in a cubicle farm for forty years.

Steve shares these journeys and pictures as an inspiration for those who are just starting. He never traveled like this during the first couple of years when starting his business. He worked his butt off, not letting failure even be an option.

How Steve Made Nearly $9K from Blogging in May 2019

Flash forward a few years and Steve outline exactly how he made this much money from one website. He does this so that you can see what's possible when you start your website with Wealthy Affiliate.

Steve uses three primary methods of monetization on his site:

The website runs 24/7, always earning money in the background.

Four Years at WA Vegas - Steves Secret for Getting There

Steve's special secret is straightforward: Don't Wait for Something to Happen!

That's the secret: all work and no shortcuts.

Steve started his website after graduating from college. He went on one job interview and decided doing something he didn't like for the next 50 years was not for him.

Here are ten essential things he has learned over the years:

Keep pushing forward to continue to better your life!

You can read Steve's post and see his pictures at The TRUE Measure of Success.