Tiffiny's most recent milestone is getting 100 referrals in 30 days. These referrals are to the WA affiliate program. Tiffany actively promotes this as part of her affiliate marketing niche.

She admits that the successful super affiliates see four or more times this number of referrals. She knows that she does not generate a full-time income yet.

But her trending continues going upward with these successful milestones. She was getting 2-4 referrals per day. Now she sees 6-8!

Most importantly, Tiffany feels fulfilled by her accomplishments. She thanks those who are supporting her business.

As for income results, these referrals are free signups to Wealthy Affiliate. In the Bootcamp training, Kyle stated that an average of 12% of the Free referral signups upgrades to a premium member.

Premium is where the new members begin paying for their membership, and as a result, Tiffany begins to see commission income. Out of her 100 free signup referrals over the past 30 days, 11 of these have upgraded to the premium status. That's pretty close to a 12% conversion rate.

You can read about this milestone success at New Milestone: 100 Referrals in 30 Days!

When Tiffany joined Wealthy Affiliate, blogging was not new to her. Affiliate marketing, however, was a different adventure.

She was a lifestyle activist and internet market with a Lifestyle Improvement and Media company she formed. As part of her responsibilities, Tiffany did a lot of freelance writing, which made up the bulk of her income.

Her goal when joining Wealthy Affiliate was to replace her freelance income with affiliate marketing, along with digital product sales.

By documenting her journey, she figured that the worst that could happen is she tried?

As it turns out this far in her journey, she did not hit her original goal of a full-time income from affiliate marketing in six months. Tiffany also learned that she was trying to do too many things at one time. She was spreading herself too thin.

Not hitting her original goal was not due to a lack of effort on her part. Tiffany published a new post almost daily.

She had created nearly 300 blog posts by the end of her first year. These articles included nearly 600,000 words in total.

She was also seeing up to 3,000 page views per month on her site.

But some of these new posts were spread out between different sites. Tiffany was also continuing to do local speaking, networks, and offering marketing services.

After her first year, she became more focused on her one site. Her goal now is to create an authority site in the more broad entrepreneurship niche. 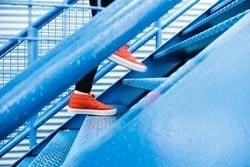 With Tiffany's latest case study update, 19 months, she indicates that she is very close to earning her full-time income. Her goal was $5,000 per month, and she can almost see that happening.

Five links to Tiffany's case studies are below. These are only the summary ones on her progress with building an authority site. She has many more on the different aspects of affiliate marketing.

Also, this content is part of the Wealthy Affiliate community's internal training resources and will not be viewable without being a member.